S.O.D. is getting into the zine game with Droppings. 16 pages, includes an Atlanta Scene Report, interviews with Joint D≠, Total Control, Kremlin, & Gary Wrong. Comes with a cassette featuring tracks from the interviewed bands (minus Kremlin) and a smattering of Atlanta bands from the past and present. Look out for issues 2 & 3 coming soon. 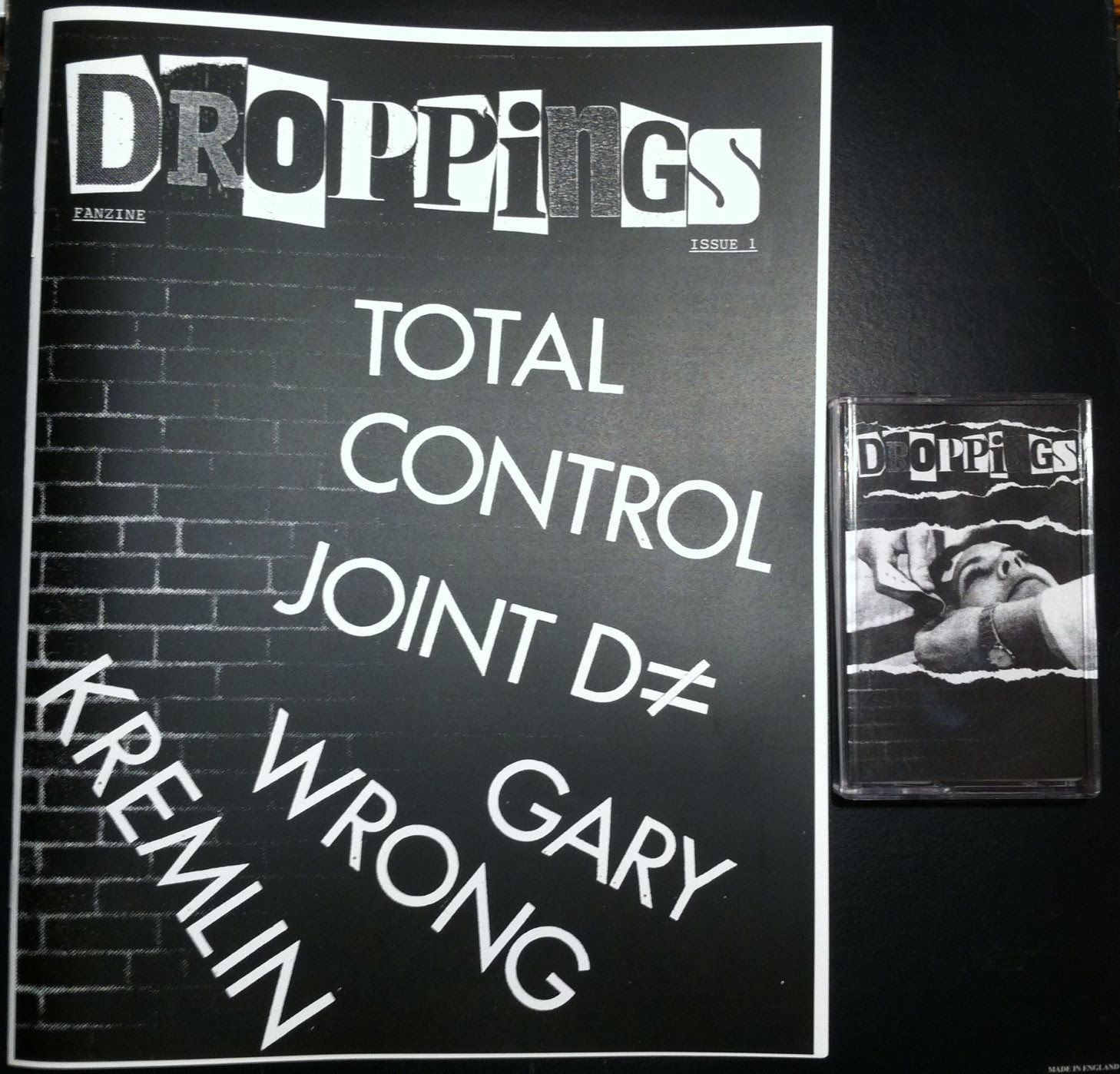 Posted by Goat Ravisher at 6:01 PM No comments:

We finally got two new releases ready, one from Atlanta's hc doughboys Mercenary, and another a reissue of an old Milwaukee punk jammer. Descriptions are below. You can listen to them on our Bandcamp and buy them in our brand new webstore! Canadians and international customers no longer have to email for simple purchases, but distros and wholesale orders should still contact us at scavengerofdeathrecords AT gmail. Thanks! 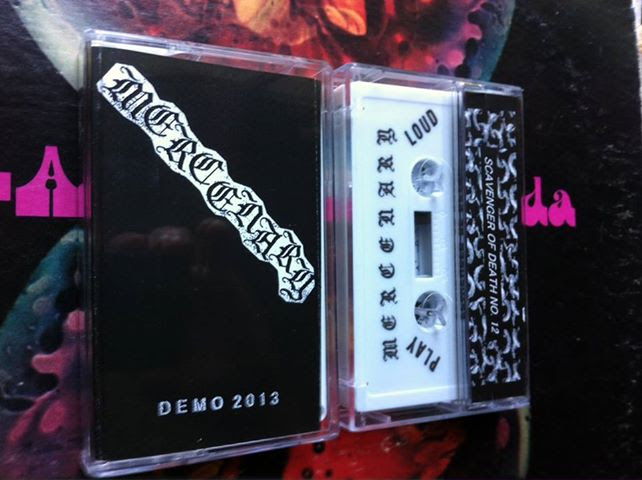 Atlanta HC raw-rager featuring wild riffage, frantic d-beat drumming, and the pummelling heaviness you'd expect from, say, Framtid. Vocals are like a neanderthal's battle cry: intimidating. 6 tracks, including one mid-paced fightstarter. Not quite raw punk, but it's dis close (get it?). 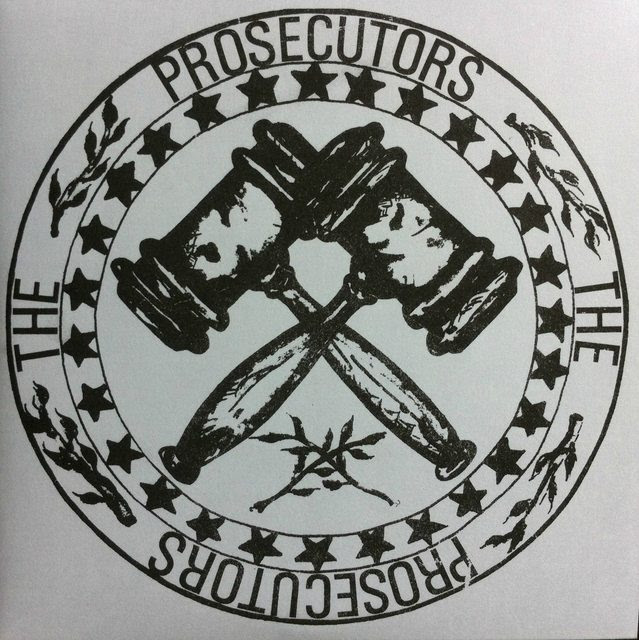 Straight reissue of a little known punk platter out of Milwaukee circa 1980.  The A side ("I've Got A Message") is a great lost-in-time punk/hard-rock slow burner with strangely ethereal backup vox that take the song to another level.  The B-side picks up the pace with the rough-but-hooky proto hardcore of "Dead Man" (also sporting those ghostly backups) and the live cut "Prosecution Rests"  (supposedly chosen in place of another studio track due to an insecure drummer).  Some time after this record was released, band leader Kevin "Kinney" Gerard picked up stakes and moved to Atlanta, eventually achieving fame with southern rockers Drivin N Cryin. A scarce record known to fetch megabucks, now it can be yours for a nominal fee (with the even scarcer picture sleeve and insert included).
***Scavenger Of Death trivia fact:  Kevin Kinney is also known to be responsible for  releasing SOD all-star Tyler Kinney (Mercenary, Ralph, Manic, Die  Ficken) into the world.
Posted by Goat Ravisher at 11:10 AM 6 comments:

Predator kicks ass, and while they've disappeared off the radar, they haven't stopped writing some stellar music. The two main guys in Predator have been playing in bands together nonstop for about 12 years, and they've taken their wire, agnew, and early hardcore influences and turned up the contrast, and the pendulum arcs farther into a moody abyss this time. This tape has 8 new recordings, including the two tracks on the comp mentioned below (the only band not to have entirely exclusive tracks) plus a b-side with unreleased tracks and a few alternate versions of their hits. When their lp came out, they had recorded a lot more songs than they needed, and consequentially my favorite song ("Spacewalk") was left off the record. Now people outside Atlanta finally get to hear it.
check out some tracks on our bandcamp

This record is the feather in our cap, our raison d'?tre, and it finally happened. This record is a snapshot of the recent vintage of Atlanta punk bands. About half of the record was recorded (sorta) Process of Elimination style -- A bunch of rockers getting drunk and barbecuing in Clay Kilbourne's backyard as the bands took turns recording in his basement. Anyways, the bands: GG King, Cops, Bukkake Boys, Gentleman Jesse, Vincas, Shaved Christ, Predator, GHB, Acid Freaks, Manic, Ralph, Wymyns Prysyn, Gods Balls. 19 tracks total. I've got the A-side up on our bandcamp (link above). it comes with a newsprint booklet featuring band info/artwork/etc. 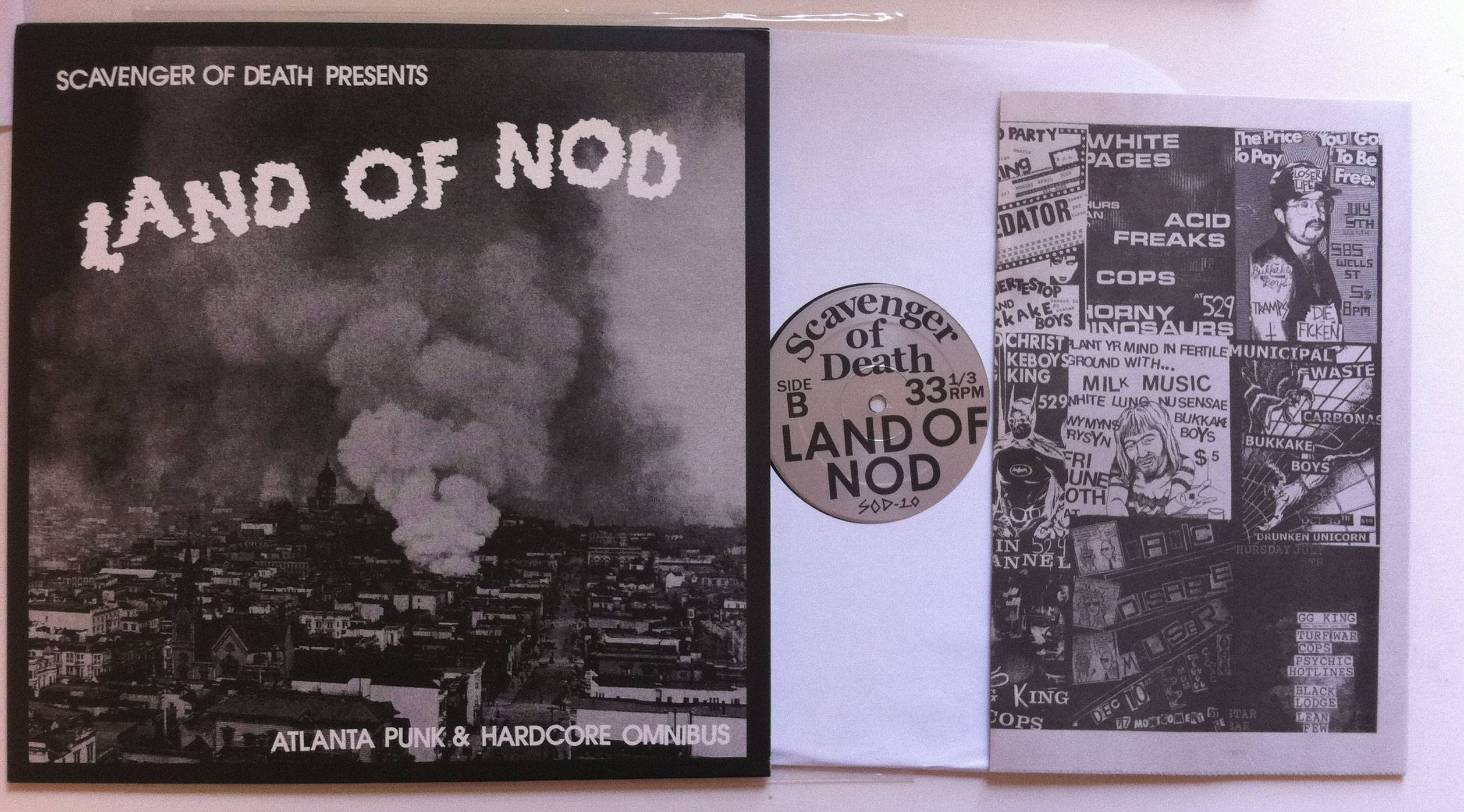 As mentioned above, we have a bandcamp, which has everything on it. Out of print releases are available for free download, but we only get 200 free downloads a month, so if those are used up you'll have to throw us a buck or so to download (bandcamp's rules not mine).

We've got some new stuff in the works, all of which should be released this year:

Prosecutors - I've Got a Message 7" reissue. A hard-to-find early eighties release from these Milwaukee punkers. Look it up, and if you're like me, you'll love it.>

Predator 12" - Most of the a-side of their cassette mentioned above will find its way onto their 12" in a remixed/mastered form, along with a handful of even newer stuff that really channels their sound. These guys are on a hot streak right now.

Atlantans take note, there is a pretty sick little show headed your way. Florida's Golden Pelicans, whom I had the pleasure of recording last year, are hitting our fair city on their way to SXSW. Predator and Wymyns Prysyn (who have a 7" coming out in a week or two on No Breaks records!) are playing with the GPs at Wonderroot. 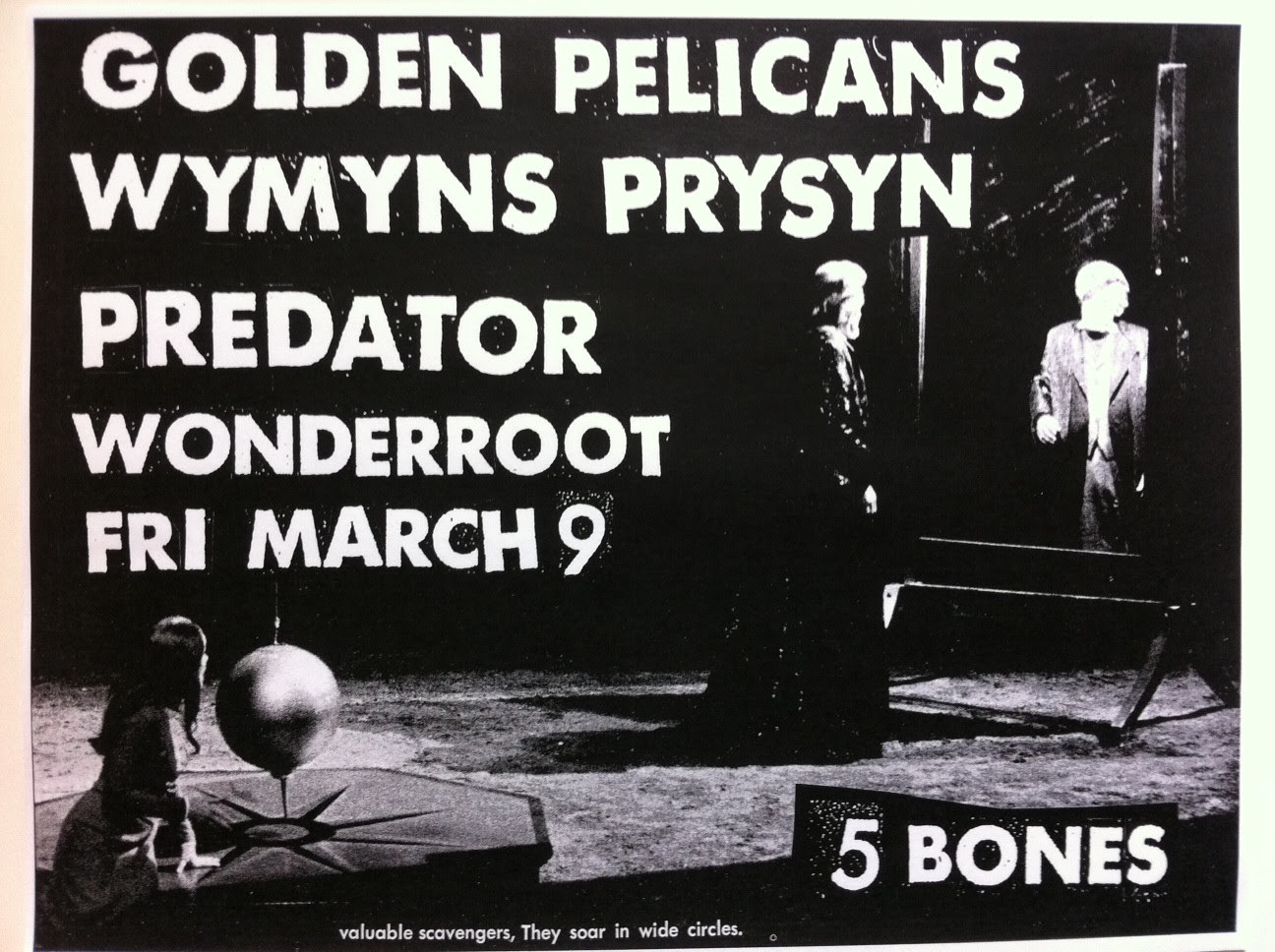 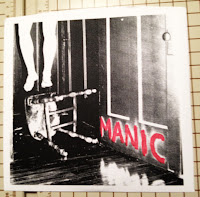 Manic: hairy, high-velocity, rampaging hardcore punk featuring vocals from an unhinged young barbarian. Six songs of barrelling chaos. Listen to the A-side here. For fans of both hardcore and haadkwah. Comes with insert. First 50 copies get a free MANIC badge. 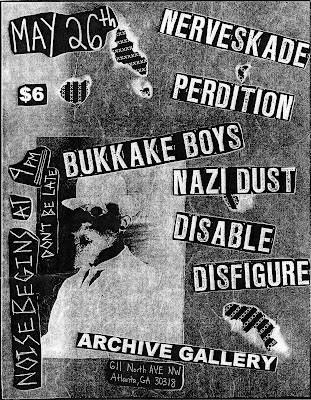 Posted by Goat Ravisher at 11:05 PM No comments:

Another interview from Plastic Cuffs. Sorry in advance for any bad scans. 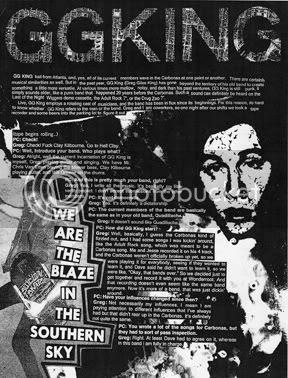 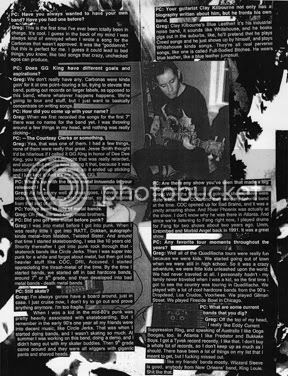 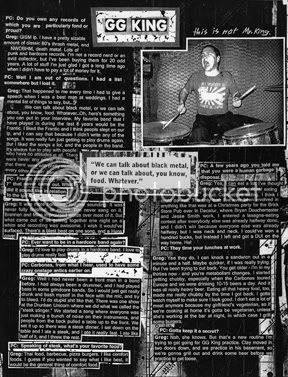 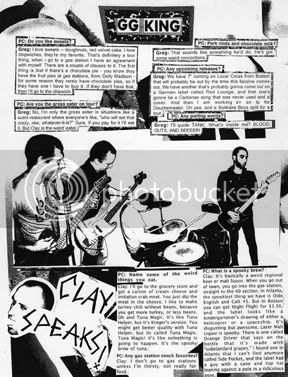 Posted by Goat Ravisher at 7:40 PM No comments:

"Death of a Delivery Man" featured on Maximum Rocknroll Radio #1240 alongside some truly tasty punk jams.
Check it out here.
Posted by Goat Ravisher at 4:42 PM No comments: